While there already exist many articles about kinky cigar service, none that I found have touched upon the concierge-style service details comparable to what one could find in a high-end cigar shop. Additionally, the ones I’ve read assume that the service recipient is already familiar with cigars and has standing preferences.

While this is certainly true in many cases, there are also those who desire assistance and suggestions with their selection, especially if they enjoy exploring new flavor profiles and smoking experiences. This can be true of novices and seasoned aficionados alike. Being able to advise in this area would be very valuable to include as part of the service to start off the scene with the refinement for which a butler is known.

I will provide information about the three critical components of a cigar’s smoking experience, which are the size, shape, and color. I will also give an overview of how to handle cigars, do a sniff test before selecting, and pair beverages.

Before we begin, I’ve provided a simple chart to use as a reference for terms you’ll read throughout this article.

Contrary to what one might believe, the size of a cigar is not indicative of its potency, (which is mostly determined by color). There are some, however, that are made of the exact same leaves in different sizes and, in that case, it does make a difference. For instance, the Mombacho Diplomatico smokes at a completely different strength varying by size. Also, La Palina El Diario in Robusto, Toro, and Gordo (medium body and average palate) is the same blend as La Palina Kill Bill in Petite Corona and Kill Bill 2 in Corona (full body and heavier strength).

There are two elements of the size, the first being the length and the second being the ring gauge. Both factor into the temperature and flavor of the smoke in their own way. The length is also an obvious indicator of how long the experience will last.

The length is measured from end-to-end in inches. The shorter the length, the hotter the burn from the start because it travels less distance from the foot to the cap. Likewise, the longer, the less hot. In either case, the temperature burns incrementally hotter the longer the cigar burns.The length also affects the flavor, as longer cigars build up flavor longer than shorter ones.

The gauge refers to the diameter measured in 1/64 inch increments. The thicker it is, the greater the insanity of the overall temperature. Thicker cigars also produce more smoke per draw than thinner ones, filling the mouth with a higher concentration of flavor at a time.

Sizes range from the “petite corona” at 4-5 inches with a 38-42 gauge, to the “double corona” at 7.5-8.5 inches with a 48-52 gauge, with several options in between. Longer, thinner cigars tend to have a more refined and elegant smoke and shorter, thicker cigars have a potent and voluminous smoke. Selections should be made based on the desired intensity of the experience, comparable to choosing coffee versus espresso.

There are two categories when it comes to the shape of cigars, parejos and figurados.

The parejo has a rounded cap, straight body, and open foot which does not need to be cut before lighting. The smoke draws evenly throughout the entire smoking experience, making it nice and smooth. These always have straight sides, be they round or box-pressed.

The figurado has a pointed cap that flares into a wider body. Due to the tapered nature of the cap, the smoke has a tighter, more concentrated draw. There is more variation within this category, each with their own distinct flair.

In general, premium tobacco cigars taste more mild the lighter in color they are and more robust the darker they are. If the service recipient likes their coffee and chocolate very dark and strong, then odds are they’ll like their cigars like that, too. There are also varying shades that can break this mold, as color is a natural variation. Each varietal (strain) has its own flavor palette. The way that they are harvested, known as “priming”, also makes an impact. Priming ligero is the strongest, seco the mildest, and viso the middle. Although it’s a decent rule of thumb to judge by color much of the time, it can be like judging a book by its cover in some cases due to these reasons.

Now let’s take a look at the seven types of colors from lightest to darkest. The wrapper color is very important because cigars get the majority of their flavor from it!

Flavored cigars, unlike premium tobacco, are sweetened with infused oils, resulting in strong flavors instead of subtle tasting notes, comparable to flavored coffees versus unflavored coffees. They taste very sweet and like the flavor that they’re labeled.Sometimes they may appear dark, but unlike unflavored cigars, darkness does not equate to a heavy mouth feel, as it is usually a result of their processing.

How to Handle, Sniff, and Select Cigars

Before making the final selection, the cigar service recipient will most likely want to follow the tradition of taking a good sniff. In much the same manner as those who drink wine may swirl and sniff their glass before sipping, most aficionados will savor the moment to slowly inhale the length of their cigar. This is usually done while the cigar is still in its original cellophane wrapper, which has sufficient air flow to allow it nicely and there is no need to unwrap it yet. If, however, the cigar is unwrapped, perhaps because it is stored in a private humidor in which the various cigar flavors are married together, then the cigar should be handled by its band to avoid damage to the wrapper from oils transferring via the hands.

If they’ve never sniffed a cigar before, this is an opportunity to advise them to hold the cigar lengthwise about an inch from their nose and take in the aroma from one side to the other. (It is considered rude to sniff too closely.) They will get a good sense of the flavor notes. Unlike smoking a cigarette, which is fully inhaled into the lungs to get a nicotine rush, smoking a cigar, which is not to be inhaled into the lungs, is about relaxing. If the scent alone feels overwhelming, then it probably won’t be enjoyable to smoke. If it feels calming, then that’s a good sign that the experience will be savored.

There are many different tasting notes in tobacco, some subtle and some strong. Here is a helpful chart of the most common ones. It can be helpful to know the options prior to sniffing and look out for what seems and smells most appealing. 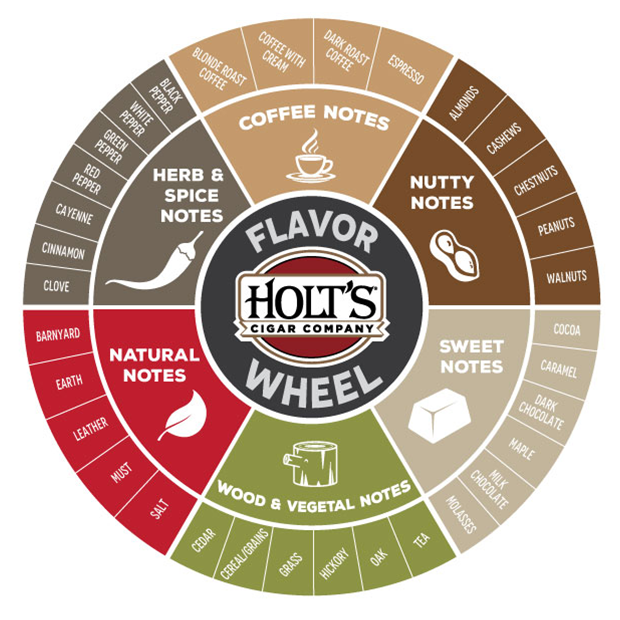 If in a venue serving coffee or alcohol, offer to pair full-bodied cigars with dark coffees, bold red wines, or scotches with robust notes of flavor or pair mild cigars with lighter roast coffees, a crisp white wine, or a semisweet tawny port.

For sweetened flavored cigars, sweet beverages such as caramel coffee drinks, dessert wines, or calvados.  In general, the beverage should be a touch sweeter than the cigar, but not too much.

Cigars are meant to be savored and there are no hard-and-fast rules to selecting a cigar. One person’s perfect smoke might be another person’s worst, and that’s perfectly fine. There is neither shame nor snobbery in the world of enjoyment. The best cigar for an individual is simply the one that they like the best!

We are on Patreon. Please consider supporting The Kinky Butler for patron-exclusive perks.